KDFN Heritage, Lands, and Resources (HLR) is participating in a City of Whitehorse project to create a master plan for Valleyview South.

The area was formerly known as the “tank farm.” It includes two KDFN Settlement Land parcels on either side of Sumanik Drive, C-117B and C-141B. Each parcel is roughly 4 hectares. 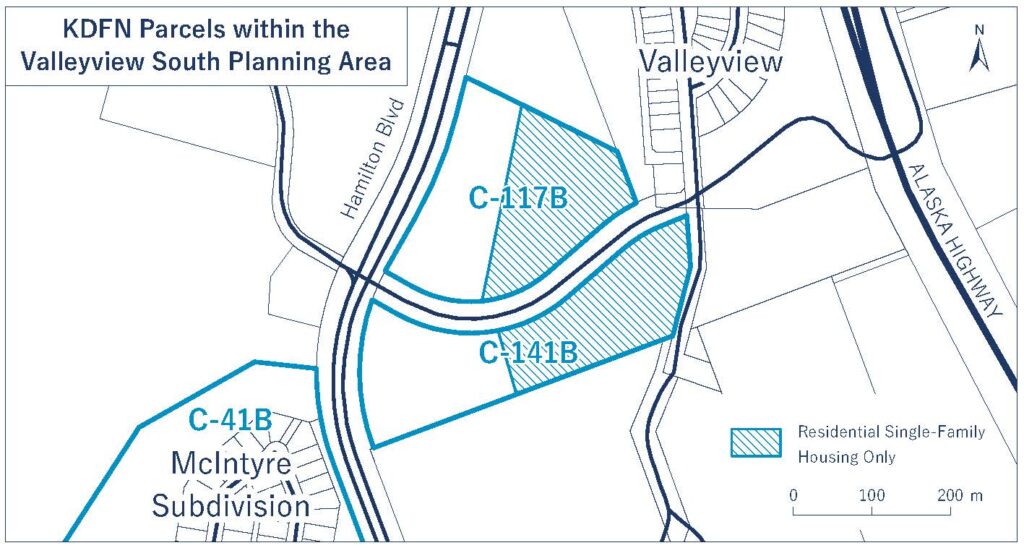 Several planning partners are involved in the project, including:

The planning area is located close to McIntyre, Hillcrest, Valleyview, Granger, and the Canada Games Centre.

Click here to see a map of the planning area.

As part of the planning process, the City, KDFN, and TKC launched a survey to learn more about what people think about the planning area.

The survey was mailed out to all KDFN households. It was available online, and at the housing strategy open house at the Kashgêk’ Building December 7-9, 2022. The survey was also advertised by the City and KDFN via website, newspaper ads, social media, and e-news.

HLR wanted to learn citizens’ and beneficiaries’ opinions on what should happen on C-117B and C-141B.

A total of 659 people filled out the survey, including 67 who identified as KDFN Citizens or Beneficiaries.

Of the KDFN responses, 45 were completed online and 22 were on paper. Three additional paper surveys were submitted by respondents who did not identify as KDFN Citizens or Beneficiaries.