KDFN Land Steward Officer Cheyenne Bradley and Fisheries Technician Trainee Kluane Clarke wake up, start the coffee, make breakfast, and get ready for work. They don’t have a far commute to get to their job though, they’re camping there.

Cheyenne and Kluane are stationed on the Takhini River, about five kilometers upstream from the confluence with the Yukon River, tasked with the important job of counting Chinook salmon as they travel to their spawning grounds.

In duos, they take turns spending between three and seven days at the sonar station. 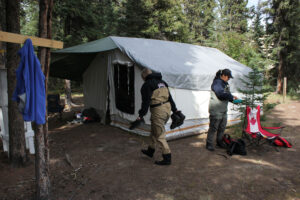 Cheyenne and Kluane gear up to perform routine maintenance on equipment.

On the right bank of the river is the camp. There are a few tents for sleeping, a generator, an electric fence to keep bears out, a spot to launch a boat, and the main tent. The main tent is like an office — inside there’s a makeshift kitchen, a few tables, and lots of computer screens.

About 100 feet downstream and across the river on the left bank is where the actual sonar is. It resembles an old TV antenna sticking out of the water. Using sound beams, it detects fish that swim by. A weir keeps fish from entering the sonar’s blind spot. Data is wirelessly sent across the water to the main tent, where it is saved and counted hourly by a program called Echostatic. 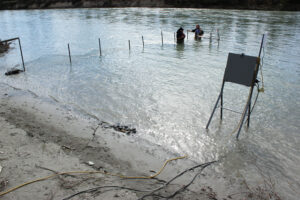 Cheyenne and Kluane clear debris from the sonar’s weir, a daily job on the Takhini River.

“Everybody knows what a sonar is in a submarine. It’s like ‘beep!’ The sound waves are bouncing,” says Cheyenne, explaining how the equipment works.

Images from Echostatic look like a colourful array of dots and speckles all over the screen. To most people, it’s difficult to decipher, but Cheyenne and Kluane know exactly what to look for. Certain dots and lines mean there are fish in the water. They use techniques like measuring the length of the lines and how fast they move on screen to determine if it’s a Chinook.

“Other species of fish, they kind of like to mill around, which means they stay on the screen for a while and then they go,” says Cheyenne. “Salmon, they want to spawn, they want to get to their grounds, so they just go.” 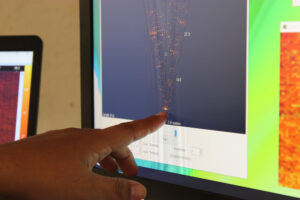 Images from Echostatic look like a colourful array of dots and speckles all over the screen. Certain dots and lines mean there are fish in the water.

Cheyenne and Kluane aren’t just counting fish for fun though. Their work supports what traditional knowledge has known for years — the number of Chinook is declining. The information collected at the Takhini River Sonar helps KDFN make conservation decisions, like asking Citizens and Beneficiaries not to harvest Chinook in efforts to preserve the species for future generations.

“In western science, they need the numbers to make decisions, whereas with traditional knowledge we know that we’ve seen different things in the past,” says Cheyenne.

“We don’t like to use the word management when it comes to fish and wildlife,” says Brandy. “We, as First Nations people, have been coming back to these rivers year after year for the salmon. They have their annual cycle and we follow them, so they manage us. To honour and respect our salmon relations, it is our responsibility to raise awareness, to protect and conserve salmon and their habitat.” 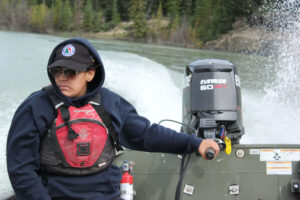 Cheyenne drives the boat across the river from camp to the sonar.

Beyond salmon conservation, the Takhini River Sonar Project also gets people out on the land.

“This camp teaches life skills. The responsibility of having to run the camp by yourself, having to cook dinner,” says Cheyenne.

As for what Kluane thinks of the sonar, they enjoy learning about all the fancy gear.

“It can be tedious but it’s really cool to learn,” says Kluane.

“I’m really into outdoorsy things and learning about the natural life of things. It’s really interesting,” they add. 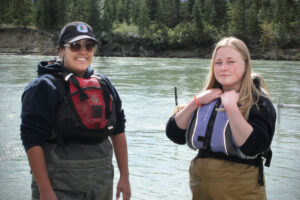 Cheyenne Bradley (left) and Kluane Clarke (right) are part of the Operations Team that run the sonar.

KDFN has been operating the sonar for two years now. Fisheries and Oceans Canada ran it in 2017 and 2018. Equipment typically stays in the water from the end of July to early September, though it can be taken out earlier or later depending on when it stops detecting salmon.

As well, they would like to send a big shä̀w níthän, gùnáłchîsh, mähsi’cho, and thank you to their partners Environmental Dynamics Inc., Fisheries and Oceans Canada, Champagne and Aishihik First Nation, and funding partners Yukon River Panel and the Yukon Pacific Salmon Commission.