Gertie Tom inducted into the Order of Yukon 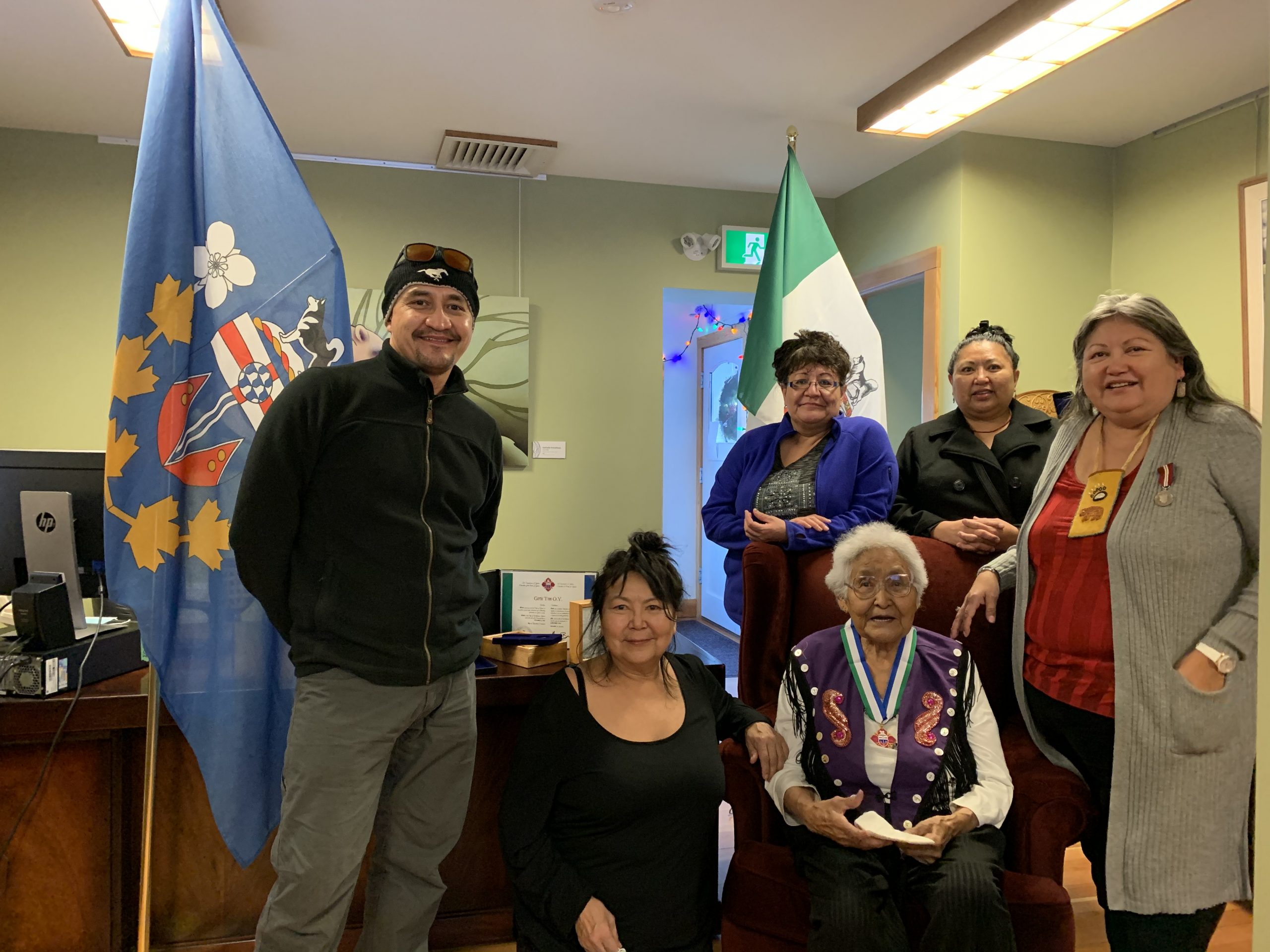 KDFN Elder Gertie Tom was inducted into the Order of Yukon on the first day of 2021. Over her long life she has made many contributions to the community, including passing on her knowledge of the Northern Tutchone language. Writer Alexander Gatensby asked Tom about her life and this recent honour.

Alexander Gatensby: How did you originally get involved with language work?

Gertie Tom: I was born in 1927, and it was ‘77 when I started with language. My mother taught me how to speak the language, so I kept the language. Then somebody I guess from Fort Selkirk told John [Ritter] that I was the only one who spoke the language. Then John got me, and I started to work with him. We worked together for 40 years.

It was really going good you know. We’d teach the kids and we’d teach the adults that want to teach in school. In the spring and fall time we would update them on what they wanted to know.

I did my best with whatever I knew. I worked with John, and I taught John how to speak the language, and in turn he taught me how to read and write the language. And that’s how it worked.

AG: Do you still work with people to teach language?

GT: I just help people, that’s what I do.

I also wrote the book about the Big Salmon area. This is what I knew… or what I remembered. I didn’t take what people told me. I used my own… like, we’d go up hunting… and drying meat and stuff like that. Then I made the story about it.

I used to work with CBC, like a disk jockey… I had to translate what people said, like requests for music, and send it out to people.

In ‘54 I trained as a community health worker. That again I had to use my own language to do it, because, the First Nations, the Elders don’t understand English, so I had to translate what they say to the people, what doctors say or nurses. That’s what I do.

AG: Can you tell me about your experience being inducted into the Order of Yukon?

GT: I never realized they were gonna do it, but I did my best, like, work with the people. That’s what I do.

You work with the people, you have to be sociable to people. They respect you. That’s how I worked with people in the day. I’d teach them when we’d have a workshop, and that’s what they’d do. I’d let them… ask questions, you know, if they want to know more. That’s what I did.

I was kind-of surprised, y’know. The Order of Yukon… They chose me.

AG: How did it feel to be recognized for your work?

GT: I feel okay. I feel really good, you know. Like me coming from the bush and I did this. This means that anybody can do this, what I can do. If you make up your mind on what you wanted to do. That’s the thing you know. That’s it.

AG: Why is it important to pass down traditional languages?

GT: Well, because we lost the language because of residential school. They did punishment if they talked their own language. That’s what happened.

I can tell you about the kids that don’t speak their language. You need the parents to talk the language too. And when they come home from school, they have to talk to the kids in not the English language. Maybe that way they might pick it up again.

Q: Can you tell me about your sewing?

A: Yeah, I spend time on sewing. I taught them in school too – how to sew, and the kids, they know how to sew, some of them.

Even today, the First Nations come to me, and I help them. I don’t have to get paid, I just tell them what to do. That’s my nature.