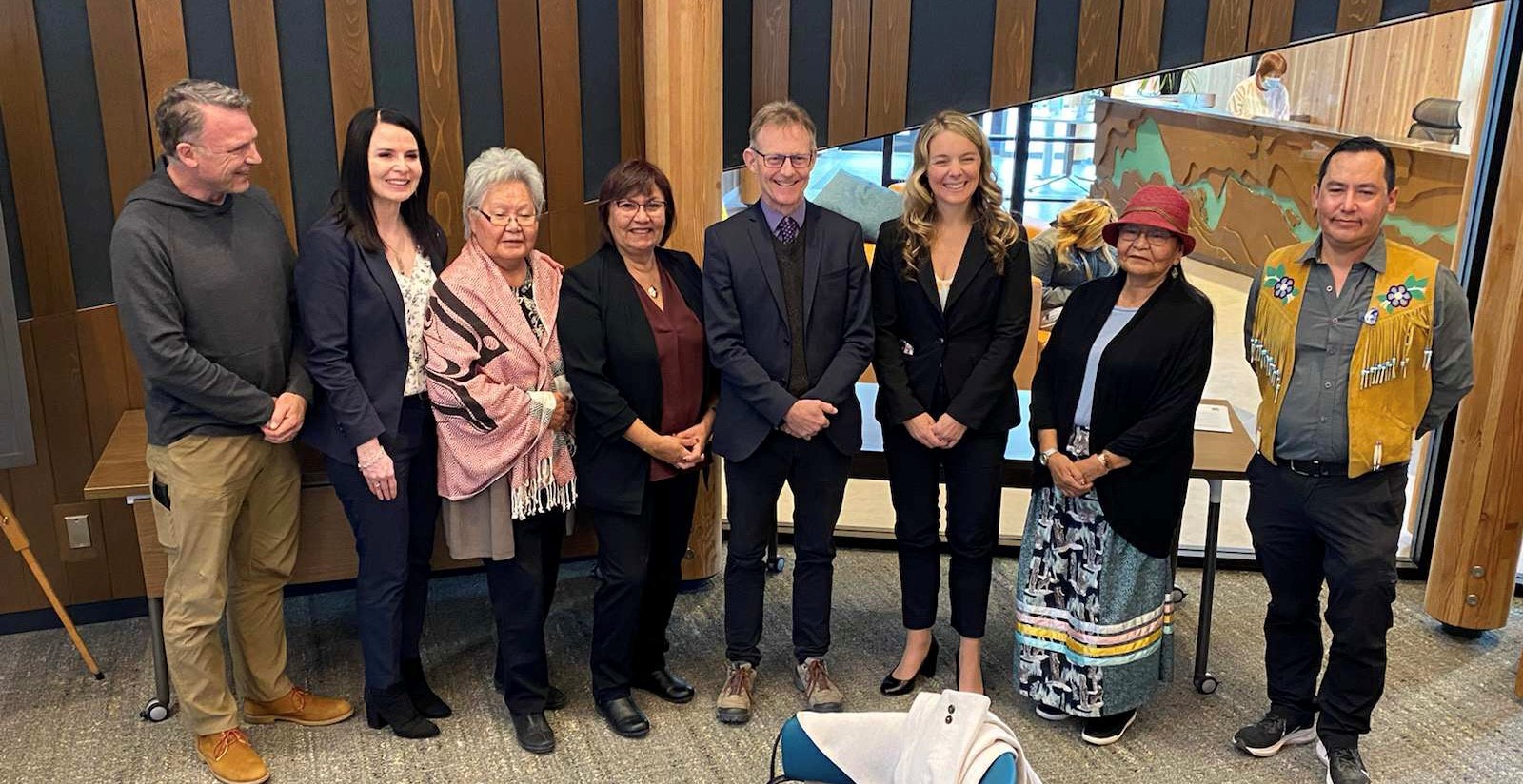 Kashgêk’—Johnnie Smith served as KDFN Chief for three terms between 1969 and 1988. Kashgêk’ was part of the historic delegation of Yukon Chiefs that presented Together Today for our Children Tomorrow to Prime Minister Pierre Trudeau, laying the foundation for the Yukon’s Final and Self-government agreements.

The building was designed with input from KDFN Citizens. It is shaped like a leaping fish to signify KDFN’s connection to the river and features work by KDFN artists. It also uses green technology, including a solar panel array on the building’s roof.

Construction commenced in 2020, on the 15th anniversary of KDFN self-governance. It was completed and partially opened for use in 2021. COVID-19 safety considerations delayed the official opening event.

“I am pleased to celebrate the opening of this building, and honoured to be able to bring the name from the former administration building to this one. With this connection to our history, we are strongly rooted in the past, honouring the leaders who brought us to where we are today. We are also looking to the future in the new Kashgêk’ building—the Council Chambers, work spaces and meeting rooms—that will support our First Nation as we move forward in a good way.”

“The new Kashgêk’ building will be a place to celebrate culture, reflect on history, and provide a gathering place for the community. The Government of Canada is proud to support the Kwanlin Dün First Nation through this new community building that will leave a legacy to future generations.”

“We have been pleased to partner with the KDFN and Canada in funding the construction of the new Kashgêk’ building. We extend our congratulations to the Kwanlin Dün First Nation on its opening and for creating an energy-efficient building that will serve them well for years to come.”
– Yukon Minister of Community Services Richard Mostyn

The building’s design was guided by Citizens to reflect natural elements that are important to Kwanlin Dün. For example:

The building was designed for northern climate. It includes renewable energy sources and design features to maximize efficiency.

This is expected to offset one-third of the energy needs of the building.

Kashgêk’—Johnnie Smith (1922-2010) was born near the Marsh Lake dam to parents Kàdùhikh K’ałgwach K’odetéena—Kitty Smith and Kanét—Billy Smith. As a child, Kashgêk’ travelled with his family throughout southern Yukon, hunting, trapping and gold mining. He learned the traditional languages, drumming and stories from his parents and continued to share those with audiences throughout his life.

Kashgêk’—Johnnie Smith served as Chief of the Kwanlin Dün First Nation for three terms between 1969 and 1988. Kashgêk’ was part of the historic delegation of Yukon Chiefs that presented Together Today for our Children Tomorrow to Prime Minister Pierre Trudeau, laying the foundation for the Yukon’s self-government agreements.